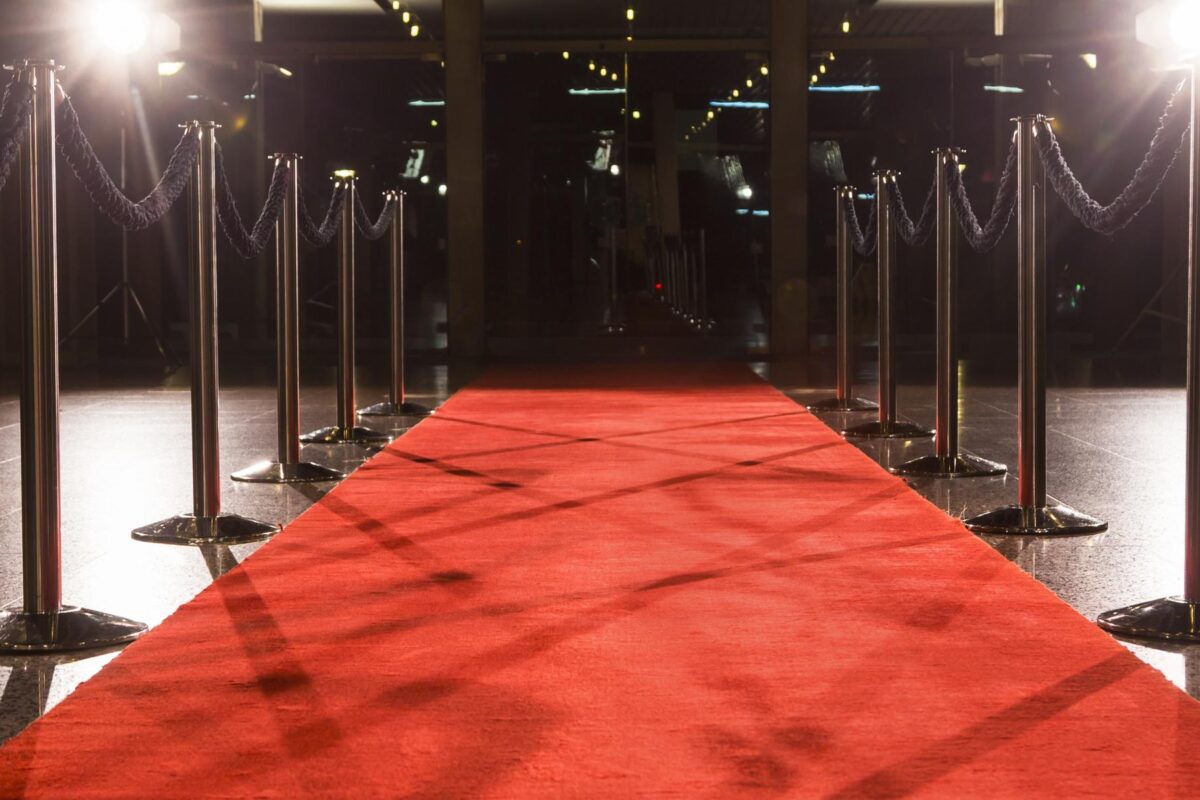 Stars are like the rest of us. Except that they are constantly in the spotlight. That means they hire an army of stylists, make up artists, wardrobe consultants, image consultants, photographers, security professionals and the like.

And now, add to that entourage, the Cyber Security Consultant! As stars live more of their lives online and share more of those awwws, or swoon-worthy moments digitally, they are learning that it is important to value and fiercely protect what little privacy they have left. Learn about the opportunities it presents for the technically adept: https://www.latimes.com/business/technology/la-fi-tn-celebrity-cybersecurity-20160601-snap-story.html

And if you are curious about factors that increase one’s chances of becoming a target, read on… https://blackcloak.io/online-threats-put-celebrities-digital-lives-in-crosshairs/ 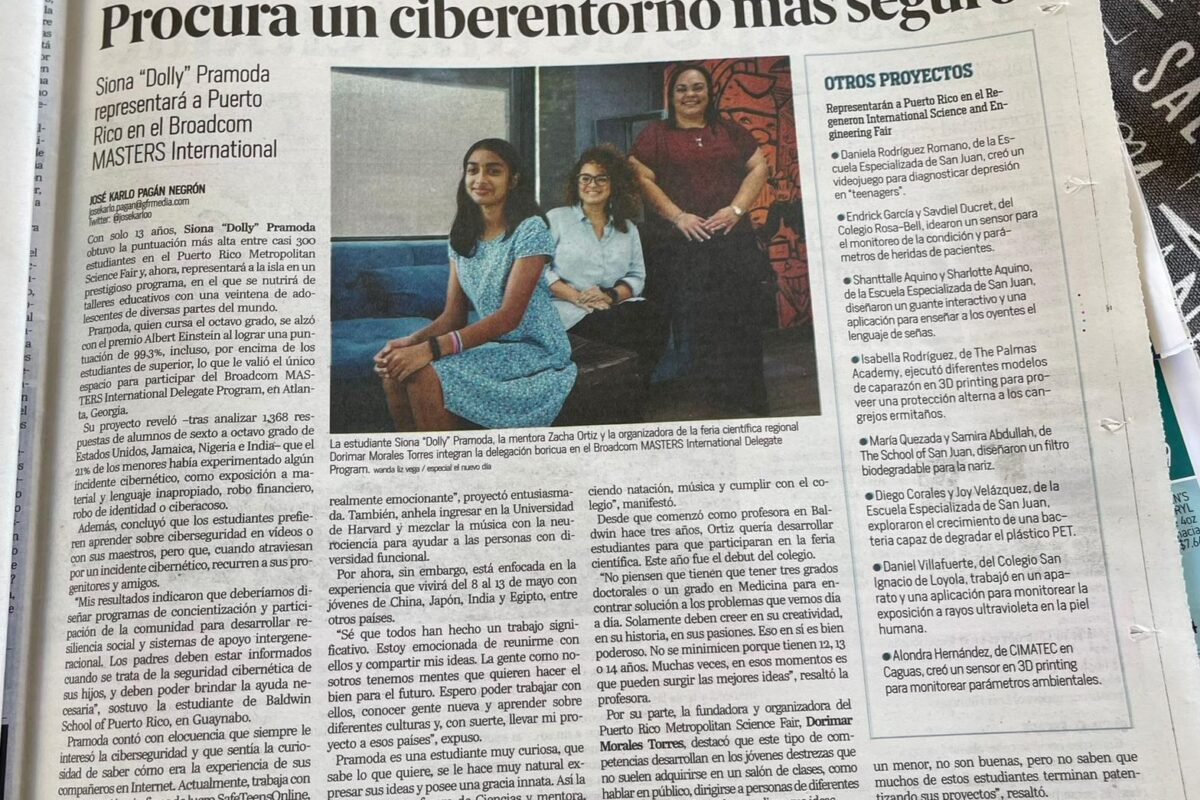 SafeTeensOnline Caribbean & North American Ambassador Siona “Dolly” Pramoda from the Baldwin School of Puerto Rico studied global middle-schooler survey responses from the SafeTeensOnline program and shared her results in the Puerto Rico Metropolitan Science Fair in 2022. She was selected as part of the PR delegation to the International Science Fair to be held in Atlanta in May 2022. Join us in congratulating her on her work combining teen cyber safety and statistical methods. She identified that middle schoolers prefer to learn about cyber safety from teachers and videos, while going to parents and friends for help upon experiencing a negative event.

Her findings highlight the importance of involving the entire community in these discussions and ensuring we explore how best to set up support systems so we may pave the way for happy, healthy and productive youth in the digital present and future.

Siona Pramoda will represent Puerto Rico at the Broadcom MASTERS International, where she hopes to enrich her project, which earned her the highest score at the local science fair.

At just 13 years old, Siona “Dolly” Pramoda obtained the highest score among almost 300 students at the Puerto Rico Metropolitan Science Fair and, now, she will represent the island in a prestigious program, in which she will be nourished by educational workshops with twenty of adolescents from different parts of the world.

Pramoda, who is in the eighth grade, won the Albert Einstein Award for achieving a score of 99.3%, even higher than the students of higher education, which earned him the only space to participate in the Broadcom MASTERS International Delegate Program, in Atlanta Georgia.

His project revealed – after analyzing 1,368 responses from sixth through eighth graders in the United States, Jamaica, Nigeria and India – that 21% of minors had experienced a cyber incident, such as exposure to inappropriate material and language, financial theft, theft of identity or cyberbullying.

In addition, it found that students prefer to learn about cybersecurity from videos or from their teachers, but when they experience a cyber incident, they turn to their parents and friends.

“My results indicated that we should design community awareness and engagement programs to build social resilience and intergenerational support systems. Parents must be informed when it comes to their children’s cybersecurity, and they must be able to provide the necessary help,” said the student from the Baldwin School of Puerto Rico, in Guaynabo.

Pramoda eloquently recounted that she had always been interested in cybersecurity and that she was curious to know what her peers’ experience was like on the Internet. Currently, she works with the non-profit organization SafeTeensOnline, which seeks to raise awareness on this issue.

In the future, the teenager wants to produce a curriculum that helps students educate themselves about cybersecurity and has the ambitious plan to impact millions of young people. “That is my goal, because it is a very important issue. Eventually, I’ll be able to do that and it’s really exciting,” she enthused. She too, she wants to enter Harvard University and mix music with neuroscience to help people with functional diversity.

For now, however, she is focused on the experience she will live from May 8 to 13 with young people from China, Japan, India and Egypt, among other countries.

“I know that everyone has done a significant job. I am excited to meet with them and share my ideas. People like us have minds that want to do good for the future. I hope to be able to work with them, meet new people and learn about different cultures and hopefully take my project to those countries”, she exposed.

Pramoda is a very curious student, who knows what she wants, it is very natural for her to express her ideas and she has an innate grace. This is how she was described by her science teacher and mentor, Zacha Ortiz, who competed in science fairs when she was a student.

“She is very disciplined for her age, which is something that you don’t see much in young people. That discipline has allowed her, not only to be able to do this spectacular project, but also to continue swimming, playing music and completing school”, she stated.

Since she started teaching at Baldwin three years ago, Ortiz wanted to develop students to participate in the science fair. This year was the debut of the school.

“Do not think that you have to have three doctoral degrees or a degree in Medicine to find solutions to the problems that we see every day. They just have to believe in their creativity, in their history, in their passions. That in itself is quite powerful. Do not minimize yourself because you are 12, 13 or 14 years old. Many times, it is in those moments that the best ideas can arise”, highlighted the teacher.

For her part, the founder and organizer of the Puerto Rico Metropolitan Science Fair, Dorimar Morales Torres, stressed that this type of competition develops in young people skills that are not usually acquired in a classroom, such as speaking in public, addressing people of different ages and lose the fear of explaining their ideas.

“There is no idea that it is very small. Sometimes, the same needs of each of the students become the engine that leads to an idea that develops into a project. Some think that since the ideas came from a minor, they are not good, but they do not know that many of these students end up patenting their projects”, he stressed.

The program that Pramoda will attend takes place in parallel to the Regeneron International Science and Engineering Fair, where eight projects will represent Puerto Rico in the competition.

The eight projects that will represent Puerto Rico at the Regeneron International Science and Engineering Fair are:

The UK Government released its much awaited National Cyber Security Policy. Petra Wenham of ComputerWeekly.com opines on it.